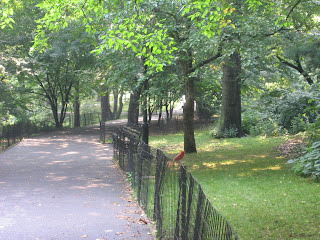 I had a magical Saturday morning in Central Park with my friend Kathy (whom I didn't know was a birder until recently). 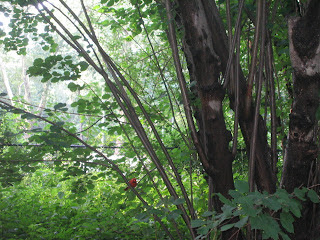 I have a low-end digital camera, with only a few-times zoom, so you know I was close to get these shots!
First we ran into an Audubon guide from a walk I’d taken with them a few months back. He thought that perhaps a bird I'd seen the week prior could have been a very, very rare sighting! He is now analyzing my photos. With the current shore bird migration at its peak next weekend, he thinks I may have sighted a melanotic Great Egret! (New term for me-means opposite of albino where all normally white areas are black.)
Next, we happened upon a very friendly couple, sporting bedraggled Audubon Society bags and scopes. We'd just seen a bird we were trying to identify, and they asked if we needed help. They pulled out a seriously dog-eared copy of "Peterson's Field Guide To Eastern Birds," and a beautiful new relationship was born! 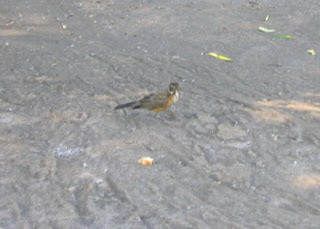 Anita and Howie, our new friends, taught us that one of the birds we could not identify was an Eastern Kingbird, and that baby Robins are NOT thrushes, but look very much like them. I don't think I'd ever REALLY seen a baby robin! They also detailed the lineage of an entire squirrel family, and identified one with a neurological disorder that they've been feeding special Brazil Nuts for a few years. 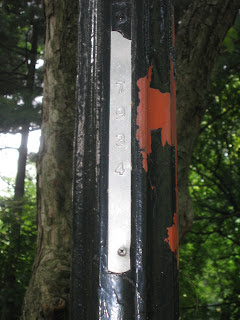 They also taught us the history behind the mysterious numbers you see posted on Central Park Lamp Posts. They showed us one up-close, and told us that if we were ever lost in Central Park, the first two numbers always tell you what street you are perpendicular to, and the last two numbers, if even, tell you how many more lamp posts to the east, and if odd, how many more to the west. Amazingly good stuff! Who knew?!
I teased my friend Kathy that Anita and Howie were secretly trying to recruit us for their pending move that never happened (see article below).
================
NY Times August 26, 2001
NEIGHBORHOOD REPORT: CENTRAL PARK; Sitter Wanted: Must Supply Nuts
By KELLY CROW
Every morning at 9 a.m., Howard and Anita Stillman
leave their York Avenue apartment wearing safari-style
hats and a five-pound satchel of peanuts, walnuts and
Brazil nuts. Their destination is always Central Park;
their mission, feeding squirrels.

Mr. Stillman, 66, a retired history professor, and his
wife, 65, a retired nurse, spend five hours a day and
$75 a week on the squirrels, which sometimes climb
onto their laps and eat from their hands.
The Stillmans call a few by silly pet names and
characteristics, like Sit on Fencie, Hang Aroundy,
Myopie (who is blind) and the trio Poolie, Doolie and
Foolie.
Prince is their favorite, an Eastern gray whom they
met four years ago by the Shakespeare statue and who
now loiters at Summit Rock.

Theirs is a missionary zeal, and they know that few
people in the park share their calling. Mr. Stillman
often says he has a mayoral mandate going back to a
school field trip made at age 8 with Fiorello H. La
Guardia. ''One thing I'll always remember was him
saying to always bring a bag of peanuts to the park
for the squirrels,'' he said.
The Stillmans cannot keep it up much longer, however,
and it worries them. They are moving west this winter
to be closer to their children, and last week they had
yet to find a squirrel-feeding successor.
Recently, they took a candidate on a trial run. Upon
seeing Mrs. Stillman surrounded by squirrels, the
friend got hysterical and ran off. They later told the
friend they understood.