During the school year, I volunteer with the New York City Police Department (NYPD) and their after-school kids program. I was looking for volunteer opportunities in technology, and had read they'd just opened a new computer lab. When I phoned to inquire if I might volunteer, I was told the computer lab was ready to go, but currently closed because they had no one to run it. Need I say more?
What I found, however, was once we got the digital center up-and-running, kids weren't necessarily asking questions about computers, they were needing help with algebra, writing, college and scholarship applications, and general homework assignments. Fortunately, I'd just purchased an algebra book of my own because I was growing concerned that I hadn't used those skills in a while and didn't want to lose them.
It is my experience that they teach me as much as I learn from them.
The Director of the center is really creative, and she came up with the idea for us to have the kids put together a newsletter. I helped them name the paper, and oversaw the layout and design, but my co-volunteer Pat and I really wanted this to be the handiwork of the kids themselves, and not some "Photoshopped" piece. Here's an excerpt from our most recent edition. 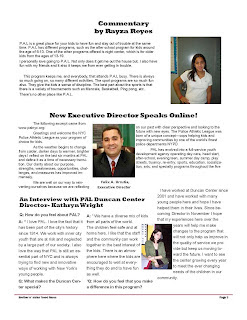 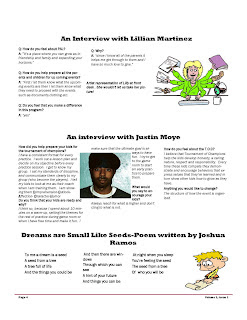 Here's a shot of Julio, the coach of the basketball team, and his players. One of the kids had taken some team photos for our newsletter and when Julio saw them, I could tell he was really excited. The next week, I surprised him with a couple really nice ones that I'd framed for him which he now displays in his trophy case at the PAL Center. 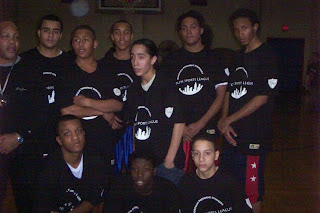