Food Banks: We're One Step From Running Out

From today's New York Times:
Food banks around the country are reporting critical shortages that have forced them to ration supplies, distribute staples usually reserved for disaster relief and in some instances close.
Posted by Mary Ellen at 9:03 PM 1 comment: Links to this post

The World Is Flat, Who Knew?! 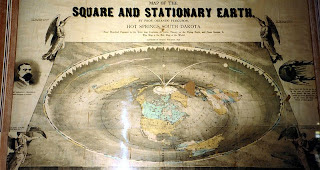 Photo Credit: Orlando Ferguson (1893)
Hmmm...it's a bit of a stretch, wouldn't you say? And what about all those pictures of the big blue ball. I dunno 'bout this one folks, but I was recently reminded (thanks to Al Gore), that Geocentricity still lives. Yes that's right, there are still those among us who believe the earth is flat. My brother was a member of The Tychonian Society (now called Association For Biblical Astronomy) for many years. I'd forgotten they existed, until last week Al Gore mentioned in a "Going Green" interview that "There are still those who believe the world is flat, but that doesn't mean we give them air-time or a podium" (Not an exact quote, from memory). Mr. Gore was responding to a question about the naysayers of Global Warming.
I am certainly no authority on this issue. I do know however, that Geocentrism states the earth (not the sun) is the center of the universe, and does not move. Now whether or not this means they believe it to be flat as well, I can't say for sure, but I think so.
Posted by Mary Ellen at 5:54 AM No comments: Links to this post