What A Day In The Park!

Well, when you're me, and the first bird of the day you see is a Red-Tailed Hawk, you know your day is going to be great! Circling overhead, right where I usually enter Central Park, there it was.

I arrived in the park around 8:40 a.m. and phoned my birding buddies to see where they were so that we could walk together. They told me that they were going to be arriving a bit later this morning, so I killed some time around the castle. I ended up relaxing on a big rock that doesn't get a lot of traffic. Next thing I knew, a little girl (who couldn't have been more than 3 years old) had slipped and fallen into the pond! I was closeby, heard her screaming and saw her flailing her arms in panic as her head was bobbing under. I immediately dropped everything and ran to her. I anchored myself on the rock and shouted for her to "Grab my hand! Grab my hand!" She was so frightened, she almost couldn't, and I thought I was going to have to jump in, but in seconds I was pulling her out, trying to calm her down by repeating over and over to her "It's OK, everything is going to be alright." I'm starting to tear-up just typing this. Her parents came running over shortly afterward, thanking me. Strangers had gathered and they too were thanking me. Some wanted to call the newspapers saying, "The Mayor will give you a medal" and I just told them, "I didn't do anything that anyone standing here wouldn't have done." I was also afraid that Children's Services might try to take the child away from the parents. They had two other girls and seemed like decent people who made one mistake. One of my friends said to me, "Yes, but that's one mistake you can never let happen!" of which I agreed, however, does this warrant the child to be taken away? I'd heard just this week of a similar instance. I am not a parent so I cannot say, but it seemed a bit of a grey area to me.

Onto birding. My friends soon arrived and we had a very special day. A Connecticut Warbler had stopped to eat more than its body-weight of worms while en-route to South America. This little bird was putting on an awesome show, and had drawn quite a crowd. I asked why it was so rare if it was named "Connecticut" and must live nearby, but I was told its name was a misnomer. 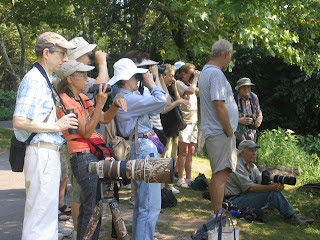 Move over Conan, a new celebrity just flew into Manhattan! 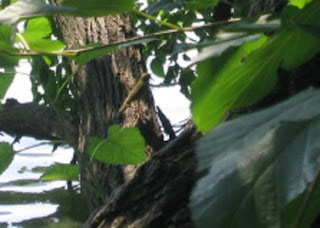 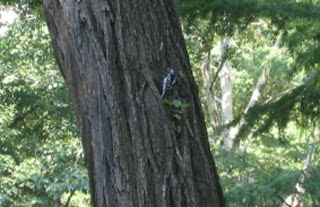 Next we saw this lovely Downy Woodpecker 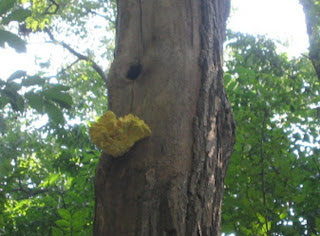 This mushroom was an incredible color of yellow! 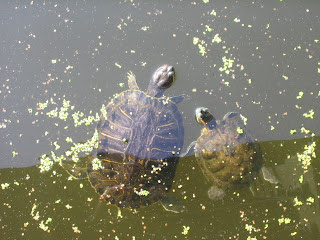 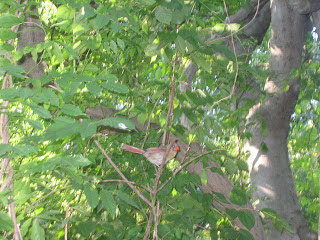 One of my friends who comes out to say "Good Morning" to me when I walk by each week. 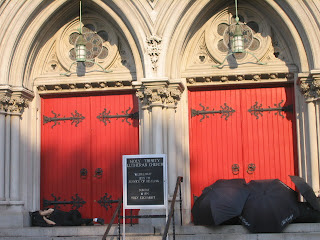