Hurray! Beavers Are Back In NYC, Chewing Up Trees! 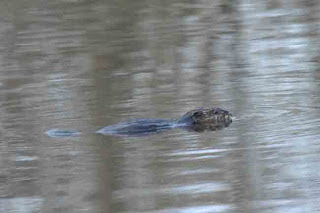 Photo Credit: Julie Larsen Maher/Wildlife Conservation Society
Newswise — The beaver, the state mammal of New York, and whose image adorns the official seal of New York City, has returned to the Big Apple after an absence that dates to colonial times, when the animal was hunted to local extinction. The evidence can be found on the Bronx River, where employees from the Bronx Zoo-based Wildlife Conservation Society have discovered a beaver, and its lodge along with numerous gnawed tree stumps, proving that a New York City original has come home. The beaver has been photographed and filmed.
Very cute video below! Beavers are notorious for being elusive, but this video captures an outline of the little critter inside his dam using thermal imaging. Well done!
http://www.nbc11.com/video/14139245/index.html
Posted by Mary Ellen at 3:45 PM