Beware Of These Bank ATM Scams!

One of my friends went to Washington Mutual on Second Avenue at 8th Street a few months ago, and remembered seeing a hand-written (scribbled) note placed over one of the ATMs with an arrow pointing to the other "good" machine, stating: "Out of order, use other machine." She didn't think twice about any of this until the bank informed her the next day of several thousands of dollars that had been siphoned out of her account. One of the things she learned to look for moving forward, was any sort of indication of tampering, and sometimes they will place a reader strip over the regular magnetic strip that is visibly different, so anything that appears out of the ordinary, alert the authorities. She was able to recover all lost funds, but that's not always the case.

SCAM ALERT #1 (Compiled by University of Texas)
A team of organized criminals is installing equipment on legitimate bank ATMs in at least two regions to steal both the ATM card number and the PIN. The team sits nearby in a car receiving the information transmitted wirelessly over weekends and evenings from equipment they install on the front of the ATM (see photos). If you see an attachment like this, do not use the ATM and report it immediately to the bank using the 800 number or phone on the front of the ATM.
The equipment used to capture your ATM card number and PIN is cleverly disguised to look like normal ATM equipment. A “skimmer” is mounted to the front of the normal ATM card slot that reads the ATM card number and transmits it to the criminals sitting in a nearby car.
At the same time, a wireless camera is disguised to look like a leaflet holder and is mounted in a position to view ATM PIN entries.
The thieves copy the cards and use the PIN numbers to withdraw thousands from many accounts in a very short time directly from the bank ATM. 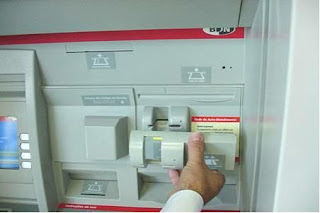 Equipment being installed on front of existing bank card slot. 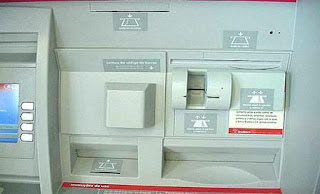 The equipment as it appears installed over the normal ATM bank slot. 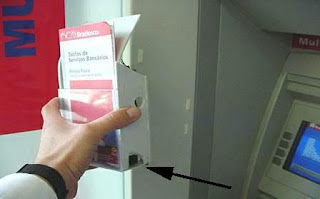 The PIN reading camera being installed on the ATM is housed in an innocent looking leaflet enclosure. 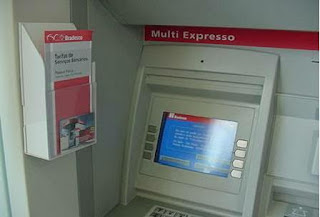 The camera shown installed and ready to capture PINs by looking down on the keypad as you enter your PIN.

The thug jury-rigs a piece of black magnetic tape so that it becomes a booby trap for your card, and then inserts it into the card-slot, of the unsuspecting bank, rendering it virtually invisible. 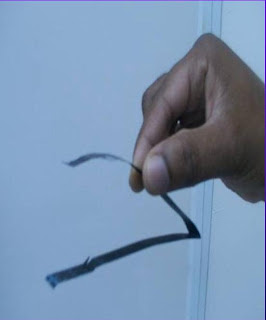 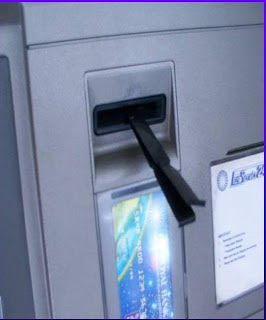 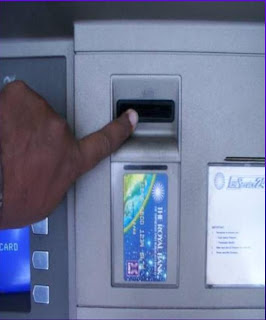 You walk into the bank, don't notice anything, insert your card but it gets stuck. A nearby "Good Samaritan" suddenly appears, ready to assist. This "helpful" person convinces you that by entering your PIN at the same time you hit the "Cancel" key, your card will be released. When that doesn't work, you give up and move on. 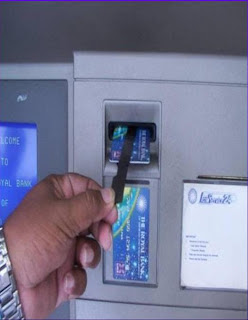 After you have exited the ATM, the "Good Samaritan" fishes out your card, and now "owns" both your card and your PIN, you do the math; warning, the answer will be a negative number!