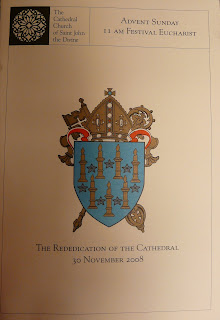 What's a Mennonite doing in an Episcopal Cathedral? Filming speakers Senator Hillary Rodham Clinton and Senator Chuck Schumer, what else? The Cathedral Church of ST John the Divine held a rededication today after 7 years of restoration from a devastating fire. What a wonderful service! One of the highlights of the service for me was when Dean James A. Kowalski introduced Senator Clinton by stating, "Will she be our Senator for long, you wonder?" Even for a church, the crowd couldn't contain themselves. My other highlight was when Dean Kowalski made reference to "another great Cathedral that we paid homage to this year, Yankee Stadium!"


Senator Chuck Schumer harkened back to the first dedication of the cathedral which happened on this very date of November 30th, 1941.

Love that place. If you haven't done the vertical tour, you need to do it.